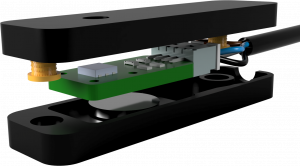 Whereas the previous version was glued, the new cap’s halves are fixed by screws. This makes it possible to replace the sensor without destroying the cap. While the temperature sensor boasts a long term stability of 0.01 °C per year, the humidity sensor’s deviation of 0.25 % per year can make it leave the tolerance range within a few years. These values are typical deviations that can even be exceeded in extreme ambient conditions. The new cap design makes it a lot easier to replace the sensor.

The second improvement is a magnet that is integrated into the sensor cap. This introduces the possibility of fixing the sensor to surfaces that contain iron, nickel or cobalt. The magnet can be removed by the customer, should this feature be unwanted.